Our group is interested in understanding the emergence of novel states of matter. We focus on heterostructures and novel device geometries to create, understand, and manipulate these states and their excitations.

Topological phases of matter, those defined by an invariant in Hilbert space, are quite challenging to identify and probe. This results from their defining characteristic, a property that is non-local in phase space and cannot be changed adiabatically. There are now numerous examples of such topological phases of matter, revealed via novel boundary modes or resulting fractional excitations. Indeed, the bulk-boundary correspondence is typically understood to suggest a topological phase in D dimensions will result in states in the D-1 dimensions that are not possible solely in their intrinsic dimension with the same symmetries. Recently, a new class of topological systems has emerged, higher-order (n>1) Topological states, whose bulk-boundary correspondence is more complex producing states (hinge or corner modes) in D-n dimensions (see Figure above). These can be thought of as topological systems whose boundary states are gapped, and are themselves topological systems, resulting in new modes at the domains between these topological boundaries.  A particularly promising system is the Fe-chalcogenides (FeSeTe) where the combination of s± order and topology could lead to higher-order topological superconducting state. Our group was the first to provide evidence for hinge modes in this system through proper device design and is working to better understand their properties. We are also exploring how the topological properties manifest themselves in other optical measurements.

Relativistic Mott insulators result from the combination of electron repulsion and strong spin-orbit coupling. Our group was the first to demonstrate this leads to fractional magnetic excitations in the van der Waals material RuCl3.  Recently it was discovered that the deep work function of RuCl3 enables strong charge-transfer in 2D heterostructures. We are investigating the optimal conditions for this effect and how to exploit it to realize a wide variety of novel correlated states and optoelectronic devices. 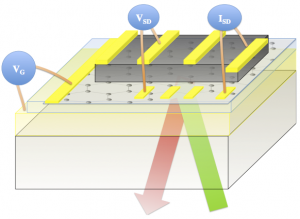 Our group has recently developed a Cleanroom in a Glovebox where all stages of fabrication can be performed. We using this to develop new techniques to exfoliate on thin-films. This allows a wide array of combinations of topological, superconducting, and magnetic materials to be combined, as well as device architectures. In addition, through careful choice of substrate and top gate (e.g graphene), we can tune the chemical potential, modify the material with light and probe using tunneling, Infrared, and Raman.

LASE in the News