In recent years there has been increasing interest in materials with topologically non-trivial states. In particular, Dirac and Weyl materials with linear dispersion. A key challenge is directly measuring their non-trivial nature, as topological invariants are defined as non-local properties. In general the materials are defined by a Berry curvature, namely how the states change in some phase space (typically momentum). When integrated around a closed surface this curvature reveals a phase related to the topological state of the material. Ultimately the phase and curvature lead to an anomalous velocity which is responsible for the quantized traverse conductance in the quantum Hall effect. Thus it is highly desirable to find probes of this anomalous velocity. In addition these materials typically have their spin and momentum locked, leading to ultrahigh mobilities and novel opportunities for spintronics. Our group is focused on understanding and controlling the dynamics of these materials, while investigating their potential use in optical devices. 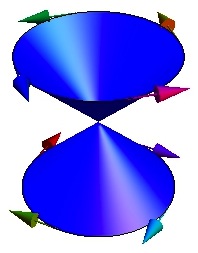 The states that form on the surface of a topological insulator are similar to those in graphene. Namely the electrons have a linear dispersion of energy versus momentum (similar to photons). However due to the strong spin-orbit coupling the spin is strongly tied to the momentum. Interestingly the direction of the spin is determined by which surface the state is on (ie: top or bottom). This results in a “helical” edge state where the spin direction rotates around the Fermi surface. The helical nature of the edge states is also why they may be useful for spintronic devices. Other groups have revealed one can generate a photocurrent due whose direction is chosen by the polarization of light. We are currently exploring the possibility of incorporating this capability into polarization sensitive detectors. To better understand the surface state from the bulk response we are also performing these measurement in the mid-IR where only the surface states are excited. 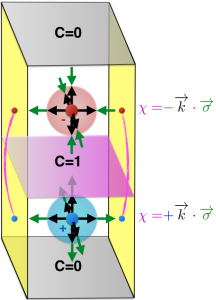 The Weyl Semi Metals (WSM) are governed by E=χ k⋅σ, where σ is a psuedo-spin, and broken inversion or time-reversal symmetry pushes the nodes with opposite chirality χ=± (k⋅σ)/|k| to different k. Each node is a sink(source) of psuedo-magnetic field in momentum space, since the psuedo-spin is locked (anti)parallel to k. The resulting Chern number (evaluated by a closed path in k) is only non-zero in the region between the nodes, where these materials are like stacked quantum spin hall systems with associated edge states. Indeed, they have been experimentally demonstrated to contain surface Fermi arcs connecting the Weyl nodes, that should have complex spin-momentum locking.

Due to the spin-momentum locking in these systems, applying circularly polarized light changes the separation between the Weyl nodes. This is predicted to lead to an anomalous hall state, due to the modulation of the topology by light. Such studies of the response to circular polarized light will allow us to directly couple helical photons to chiral electrons. In addition due to the large separation in k-space of the nodes, the scattering is strongly suppressed. This results in extremely high mobilities and could enable fast IR detectors. Studies are currently underway to quantify this effect.

LASE in the News